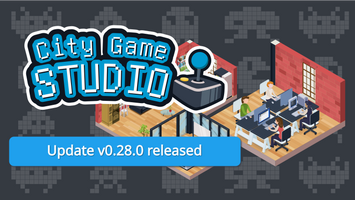 Customize your games, create a pixel art game and release it on VBox! Players are going to calibrate their joystick for the next Fighting game you are going to create!

You've created your first game engine but there is a... a ... a new technology already available... No problem, just update it, there is no need to create a new one. Unless it is an old game engine, in that case, you'd rather create a new game engine than update the old one (legacy code shhhh).

Each platform has its own specifications. There is no way to port a VBox game to a Handboy console. The handboy cannot handle the load of a VBox game! So to help you port your games, I reworked the game port creation panel.

[url=https://github.com/binogure-studio/city-game-studio-i18n]Join the community[/url], and come help us improving translations for City Game Studio

Get City Game Studio: a tycoon about game dev